David Kroll paints with the touch of an Old Master. Refined layers of oil on canvas, linen and paper are applied to capture not only the exquisite light of a sunset in a background, but the highly detailed and intricate reflection of a ceramic bowl or vase, a bird perched on the rim, a drop of water, a pearl necklace placed in the foreground. The staging is sparse and often features woven nests, tiny bird eggs of multiple colors, a fragile spider’s web, which taken together offer an ironic and contemporary perspective to the work. It is clear that Kroll revere’s pre-modern nature painters, like those from the Hudson River School, and that he wants to provide viewers with a place of peace and solace to experience what is left of nature today. The objects in the foreground are often easily broken or destroyed, like the pearl necklace that has come unknotted and unstrung. This provides a moment of pause, inclining the viewer to consider the fragility of humanity and nature. 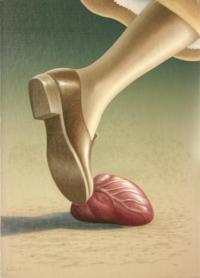 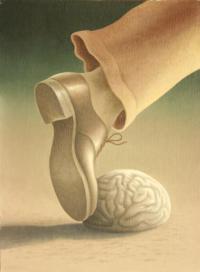 Continuing March 28, 2010
Redline
Denver, Colorado
“Love Lines,” curated by Robischon Gallery, is the first exhibition at this year-old facility to fulfill its mission of providing a strong connection to the critical vanguards of contemporary art. It was a treat to see British artist Tracy Emin’s confessional “Those Who Suffer Love,” seen recently at New York’s Lehmann Maupin Gallery. But equally as intriguing and powerful are works by Colorado artists. Margaret Neumann’s painting “Romulus and Remus,” features the groundless image of two women on all fours, breasts hanging, in shades of black and dark blue against a multi-layered, dirty white background similar to those of Susan Rothenberg. Laura Merage’s chromogenic print “Anguish” is a 60″x 40″ close-up image of a female torso clutching her breasts in torment. Jonathan Saiz’s piano installation was too cliché for me in its use of roses and hearts. But his placement of the male images in the multi-media work “Us,” top right and lower left, pulling on a rope, provides the right tension. This show could have easily been saccharin sweet, but instead encompasses love in equally diverse forms: passionate, erotic, forbidden, unrequited, and transcendent as an art form.

“Face to Face” brings together 36 portrait drawings from various private collections in Colorado. Curated by Julie Augur, serving as an adjunct curator for the Museum, the exhibition primarily features 20th Century works. However, Augur has included two older drawings: “Portrait of a Woman Wearing a Hennin,” ink and chalk on paper from 1500 by Bernardo Buotalenti and “The Grotto of Pan,” watercolor and ink on paper from 1856 by Richard Dadd. These two works are hung on a wall salon style with 15 other drawings in all media, styles and from diverse time periods. These are not drawings with the sort of coded symbolism about the subject’s status, virtue or worthy attributes that we associate with the Old Masters. They are more current than historic, and their inclusion tweaks our expectations of portraiture by raising critical questions about how we establish identity and construct history from sanctioned representations. Furthermore, the salon hanging emphasizes a non-linear art historical perspective.

Near Buotalenti’s drawing is “M.F. in Her Striped and Beaded Sleeping Jacket” (1996-7, pastel over monoprint) by Lisa Yuskavage. It is an intricate image of a woman with distended breasts done in Yuskavage’s distinct style. As a viewer’s eyes jump from one time period to another, from one portrait to another, as they look face to face at each subject, the idea that “earlier works reflect an eye for correctness of physical appearance and later examples show a looser, more relaxed approach with an interest in portraying the psychological as well as the physical,” as museum text and press materials suggest, falls away.

One begins to focus on the emotional response to the work, not the mark making or the medium, nor the year it was made. Augustus John’s “Portrait of Dorelia” (1908 watercolor and chalk on paper) is nearly as melancholic as Lucian Freud’s “Self-Portrait,” a darkly shadowed watercolor and graphite on paper from 1961. Marlene Dumas’ “Bad Mouth” (1996, mixed media on paper) is a plum colored face with thick black eyes and textured crusty lips. Her “Erika” (1998, ink and acrylic on paper) features a full frontal nude with eyes that draw the viewer back again and again. Thomas Schütte’s “Big Head (Grosser Kopf)” (1992, ink on paper) defines a yellow head with fine lines. This group fills the back wall of the gallery, and perpendicular to them are works by Francesco Clemente, “Self-Portrait with Lemon Heart,” an oddly tinted watercolor on paper from 2005. Each work is disturbing, dark, sad, and soulful.

On a pedestal in front of Dumas’ drawings is Robert Crumb’s “Portrait of Jackie and Ari,” an ink on paper drawn tabloid cover from 1970. Across the room, Philip Guston’s “Untitled” (1970, ink on sheetrock) is a charged image of cone-headed figures pointing at each other with large hands, one holding a cigar. Bill Amundson’s “Self-Portrait with Pricey Mountain Homes” (2008, graphite on paper) displays his head capped with windmills and Aspen McMansions in a rich mix of humor, irony and neurosis, just as Charles Sarka’s early 1900’s graphite portrait “Mice” is whimsical and satirical. Chuck Close’s “Phil” (1973, ink on paper) lays his signature grid over a realistic drawing. George Condo’s “Constructed Female Portrait” (graphite on paper) brings together differing graphic elements and vaguely architectural structures to create a face, while hinting at a broken and reassembled identity.

Two works that weaken the overall experience are tucked on a slanting wall between the rest of the show and the Oceanic galleries. It wasn’t just the odd angle of the wall but the subject matter. “Study for Landscape” (1994, collage) by Mark Tansey and “The Instant Decorator/Sun Room with Richard and Harley” (2001-07, mixed media on card) by Laurie Simmons seemed out of place in this show. Not because they weren’t drawings, nor because they were hung too close together, with the larger image mounted directly above the smaller one. Rather, they seemed to lack the same evocative elements of the other portraits.

One thought on “From Visual Arts Source: Face to Face, David Kroll on the fragility of humanity and nature, and Love Lines”