In the December issue of Cowboys & Indians: 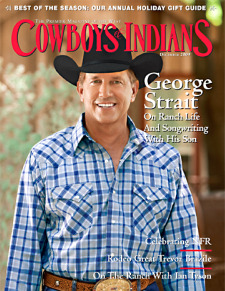 Starting her art career relatively late in life has not slowed Roberts down. “If you love what you do and have a good heart, just do your best,” she advises. “So many people stop too soon. They just give up.” Roberts’ own perseverance has paid off.

Some have described Tobey’s work as loose and impressionistic, but Tobey sees structure and pattern in her landscape paintings, which evoke mosaics and stained glass.

K. Henderson does not set out to paint portraits. Rather, her figurative works are an attempt to capture emotions. “I’m trying to get some sort of reaction from the viewer,” Henderson says.