Day 8. Began with writing time. Wow! Actually a few hours to write. My second article is about John Ruppert a sculptor from Baltimore who won the Baker prize and was on display at the BMA. We toured John’s studio with him, which was great fun and when we left he handed everyone an old catalog from an exhibition of his work called “Opulence: Cast Sculpture of John Ruppert.” I sat down to read it and decided to quote the author in my piece. To my surprise the author was Adam J. Lerner. Adam is the chief animator at MCA Denver. He started the LAB of Art and Ideas, but before that he was a PhD candidate at Johns Hopkins when he wrote the catalog copy. So here I am in DC writing about a Baltimore artists, represented by a gallery in Santa Fe, reading a catalog written by Denver’s biggest contemporary art figure. It couldn’t be more serendipitous.

After lunch, we boarded yet another bus and headed to the National Gallery of Art. Jack Rasmussen warned us we would not be happy, but that we had to be back on the bus by 4 p.m. which meant we would have very little free time to explore the NGA. Having never been there I had no idea indeed how difficult it would be. We listened to a lecture by Eric Denker a curator at NGA. The title of his talk “From Curator to Preparator to Fundraiser,” irritated most of the journalists in the audience and didn’t provide the kind of information for which we were hoping. Then Denker showed us two paintings, a recently restored Manet, “The Old Musician” and Renoir’s “Pont Neuf, Paris”. We were dragged kicking and screaming (not literally) through gallery after gallery of paintings, sculpture and work that we wanted to see, but couldn’t to meet with Randall Packer again and tour Leo Villareal’s fun, fascinating and interactive installation “Multiverse” in the tunnel between the East and West buildings.

We also toured the Calder mobile in the giant lobby of the I.M. Pei designed building and Andy Goldsworthy’s “Roof” that breaks through the windows. We then had 15 minutes to see what we could and get back to the bus. I managed to get a glimpse of Barnett Newman’s “Stations of the Cross,” the Calder room and a few other significant works of modernism and post-modernism.

We were back on the bus and headed to 14th Street to attend the vernissage of “Street/Studio” at Irvine Contemporary. The exhibit features street artists who have become the darling’s of the art market–Shepherd Fairey, Swoon, Pisa 73, Evol, Gaia, Imminent Disaster, James Marshall and Oliver Vernon. After dinner, AU hosted a panel on street art and graffiti.

Day 9. We met for writing workshop. I am in Group 1 and I really enjoy my group: Maria (Philippines), MiChelle (Tennessee), Milagros (Venezuela), Phillip (New York) and Ilham (Indonesia). Our leader is Mary Kay Zuravleff. The discussions are in depth, respectful, and the comments are always right on target. This was followed by a panel discussion elusively titled “Opportunities for Publication,” because it feature three bloggers and no discussion of opportunities for publication, perhaps because there are such limited opportunities for publication for art writers in the U.S. Print media is alive and well around the world. Panelists were Lennox Campello (the Daily Campello art blog), Lee Rosenbaum  (Culturegrrl) and Andras Szanto (Artworld Salon).  This was followed by what was supposed to free writing time, but ended up being nap time. Then a walk to dinner at a nearby Thai restaurant followed by a laundry party (which is exactly what it sounds like).

Day 10. Ostensibly our free day. I was able to sleep in a bit and then sit around and chat with Maria and Kathy. It was nice to just have time for girl talk over tea. (I was relegated to drinking tea because we had no way to make coffee in our rooms.) I then went to Tenley Town and read the New York Times over a cup of coffee at Starbucks before heading down to Dupont Circle. I walked around, conducted a telephone interview for an upcoming artist profile in Cowboys & Indians magazine and then visited the Phillips Collection, viewing “Paint Made Flesh,” “Luncheon of the Boating Party” and the Rothko room. I left the Phillips Collection and returned to SAAM to see “1934: A New Deal for Artist’s” exhibition of art created during the WPA. Everyone met up for dinner at La Tasca near Chinatown for tapas, sangria and then back to Nebraska Hall to do laundry.

Day 11. Free writing time. I set myself up in the communal writing room and was able to get a bit of work done because it was more comfortable than the dorm room where the desk was too high for a laptop and the chair uncomfortable.  At 1:00 Dr. Helen Langa lectured on Feminism and Art History. We were supposed to get a break at 2:30, but Langa continued her lecture. Then at 3 Mary Kay Zuravleff led a seminar on Writing. It was supposed to be about Writing Criticism, but it was more about writing in general though she made some salient points using an ven diagram. Gotta love a writer who was a math major. Zuravleff then read from her novel “The Bowl is Already Broken,” the story of a Rumi scholar at an Asian art museum.  It’s a book the New York Times called “a tart, affectionate satire of the museum world.” After dinner, we watched “The Royal Tenenbaums.” 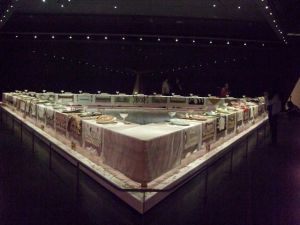 Day 12. We boarded yet another bus at 7:45 am for a four hour trip to New York. I’ve never entered the city from New Jersey and it was beautiful to see the Statue of Liberty. We took the Manhatten bridge to Brooklyn and at lunch at this great little Greek restaurant Teddy’s on Washington Ave. Then we visited the Brooklyn Museum of Art. It was Wednesday and the museum was closed, but we had a private tour and met with Elizabeth Sackler and curator Catherine Morris at the Elizabeth Sackler Center for Feminist Art. I’ll be writing about The Dinner Party and the definition of feminism, or lack thereof provided by these women.

We met Judith Rodenbeck at Exit Art and toured the “Negritude” exhibit then had a discussion with curator Greg Tate and Rodenbeck. We checked into the Buckminster hotel on W. 57th Street and then went to the opening of the James Ensor exhibit at MoMA.

As Doug McCash from New Orleans said,  the difference between attending an opening at MoMA and an opening probably anywhere else in flyover country is they don’t serve endive with herbed mayonnaise. Briefly visited with my friend Heiki before dinner at Shelley’s. After dinner Doug, Kent and I walked with Milagros, Ilham, and Maria down Fifth Avenue and over to Times Square and back to the hotel. The best thing was going back to the hotel and sleeping in a real bed with real pillows. 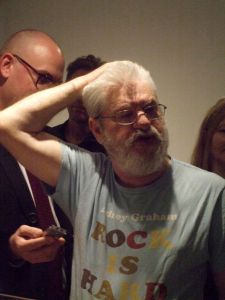 Day 13 New York City. Had to check out and leave the pillows behind. Our first stop was the Whitney Museum of American Art where we attended the press preview for the Dan Graham: Beyond exhibition that came to the Whitney from LAMOCA. Was able to see the Claes Oldenburg and Coosje van Bruggen exhibit. I walked  down East 75th Street to Second Avenue. I was rapidly approaching the brick wall. I could see it up ahead. Too many ideas. Too much art. Not enough time to put it all down on paper. After lunch we went to Chelsea and toured seven galleries in the rain: Yvon Lambert, CRG, Julie Saul, Gagosian, Zach Feuer, Matthew Marks and Lombard Fried Projects with artfagcity blogger Paddy Johnson. After a very long bus ride home stuck in traffic I stayed up and put down my thoughts on the institute and what it meant to me. I’ll be posting that shortly. 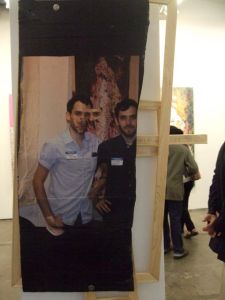 Mark Flood self portrait in Chelsea Whores at Zach Feuer

Day 14. Writing time. Final assignment drafts are due. There is talk of publishing an anthology of work by all the writers. The pressure has just been ramped up and we are to make final presentations beginning tonight after dinner. I didn’t file what I began to call my rant, instead during workshop I talked about all the ideas I had with Mary Kay and narrowed them down to one or two. We learned that representatives from the NEA and the State Department would be present for our presentations. My plan to wing the enitre thing and be impromptu suddenly changed. This was followed by our final lecture on Nam June Paik by John Handhardt. After dinner we began our presentations. For my presentation I read from my rant and talked about what the institute had meant to me, what I got out of it. Yes, I’ll share soon.

Day 15. Remaining presentations. Here’s some highlights of what others had to say.

Time to leave and go our separate ways. It was emotional. For 16 days we were put together without outside influence. No T.V., no radio, no news of the world. The NEA, State Department and American University brought us together and we bonded, we ate meals together and viewed art and sat on long bus rides. We stayed up late dancing and we talked a lot about art and writing. We laughed. We shared. And we solidified our perspectives, our manifesto’s and our purpose.

It was life changing.

2 thoughts on “Shifting Perspectives at the NEA Institute”