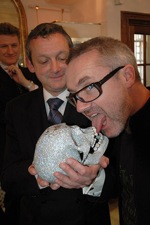 The relationship between a young British graffiti artist  who goes by the name Cartrain, and uber-artist Damien Hirst, has soured still more. Cartrain last year appropriated images of Hirst’s diamond encrusted skull, “For the Love of God” for use in his collage art. After Cartrain then sold those images on the website 100artworks.com, he had his first run-in with Hirst. Hirst reported Cartrain to the Design and Artists Copyright Society and a string of legal letters were sent to Cartrain’s art dealer, Tom Cuthbert, at 100artworks.com. The online gallery surrendered the young artist’s works to Hirst with a verbal apology. (Cartrain’s age has been variously reported; he is somewhere between 16 and 23 years old.) Hirst then demanded £200 for use and copyright fees, which Cartrain refused to pay because Hirst and DAC were in possession of the artworks.

Interestingly, images available for purchase today at 100artworks.com include the skull imagery.

Also interesting is that Hirst, who appropriated the idea for the diamond-crusted skull sculpture from a former artist and friend has made such a big deal about this. (He’s also been accused of stealing the idea for his butterfly works from artist Lori Precious.) As the Art Newspaper reported last year, Hirst and his London dealer, Jay Jopling of White Cube, are partner-investors in the “For the Love of God” sculpture, which had a price estimate of $50m and was excluded from a group of objects Hirst sold at auction at Sotheby’s London last September.

Cartrain admits that he’s never been a fan of Hirst’s art, which famously includes sculptures of sharks, calves and bulls in formaldehyde with titles like “The Physical Impossibility of Death in the Mind of Someone Living” and “Saint Sebastian, Exquisite Pain.”  Hirst is also known for his dot paintings, spin paintings, butterfly mandala objects, and large installations of pharmaceuticals, as well as for his dabbling in the nightclub business in London.

When Hirst’s “Pharmacy,” went on display at Tate Britain, the room-sized installation representing a real pharmacy was outfitted with cabinets containing bottles and packages of prescription drugs. On one counter were four apothecary bottles filled with colored liquids in blue, yellow, red, green, representing the elements water, air, fire, earth. Somewhere on the shelves were boxes of Faber Castell pencils.

One of those boxes of Faber Castell 1990 Mongol 482 series pencils, went missing from Tate Britain in July. Cartrain admitted to pilfering the pencils as ransom for his yet to be returned artworks. He fabricated a mock “wanted” poster that read:

“For the safe return of Damien Hirst’s pencilers I would like my artworks back that DACS and Hirst took off me in November. It’s not a large demand… Hirst has until the end of this month to resolve this or on 31 of July the pencils will be sharpened. He has been warned.”

The prank backfired and the Art & Antiques Squad of Scotland Yard arrested Cartrain and his father.

He was told by custody officers that the pencils were valued at £500,000 and that he had damaged “the concept of a public artwork titled Pharmacy … valued at £10,000,000” according to the Independent. Cartrain posted bail. His hearing is today. If convicted he will be guilty of the highest value modern art theft in Britain.

How is Cartrain’s use of the image of “For the Love God” that much different from the University of Missouri MFA student, J. Sloane Snure Paullus (sloanestudio dot com/hirst) who also appropriates Hirst in his work? Sloane has said he found his crystal skull at a Michael’s in Amarillo, Texas, though the first image on his website appears directly appropriated from an image of “For the Love of God.”

Cartrain has said in an interview that the image in For the Love of God is not entirely Hirst’s. “It’s not really his. There should be freedom in art. I think Hirst is only in it for the money.”

Perhaps the real issue is that Hirst, the most famous, well-known and richest living conceptual artist is being out-concepted by a teenager?

These links will take you to more information:

One thought on “The Price of Being Damien Hirst from adobeairstream.com”