“Mind the Gap” is a warning phrase and a reminder to passengers in the London Underground of the significant—and potentially dangerous—space between the train door and the station platform. To “Mind the Gap” means that one does not stray beyond the bounds of normalcy and status quo. Cyndi Conn, former curator for the Center for Contemporary Art in Santa Fe, recently curated an exhibit of contemporary surrealism for Eight Modern gallery themed and titled: “Mind the Gap.” Beyond reality and consciousness, within the gap, is a dreamlike, hallucinatory world that is mined by artists every day, artists who dwell between fact and imagination, between truth and reality. Conn selected six of these artists for the exhibition: Rita Bard, Jennifer Hoag, Fay Ku, Katherine Lee, Kim Russo and Tuscany Wegner. 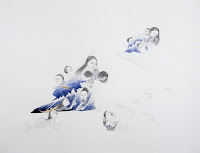 Rita Bard’s watercolor on paper paintings pile up and pair down everyday objects such as couches and chandeliers into striking, sometimes ludicrous and often enchanting scenes. Bard explores philosophical and moral issues with tongue firmly in cheek. Jennifer Hoag’s photographs are visual fictions produced by importing deer into urban and suburbran environments, prompting viewers to wrestle with their assumptions about the place and function of animals in the modern world. Unfortunately, Hoag’s photographs were lacking a technical finesse to provide the viewer with a suspension of belief. Her landscapes were clearly human constructs and the heavy handed title of the series “Nature of Invasion” limited the elegiac quality of the series. 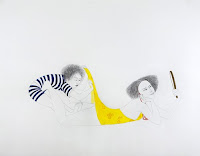 Born in Taiwan and raised in America, Fay Ku is a self-described outsider, whose inspirations range from the morbid Chinese folk tales of her childhood to contemporary film and literature. Simultaneously macabre and whimsical, her beautifully-executed drawings were enigmatic, dreamlike and delightfully wicked.

Katherine Lee’s oil and spray paint paintings transform familiar settings like a motel swimming pool, a country road, a Toys R Us store into surreal scenes at once familiar and unnerving. Lee’s work is void of action, and are spaces of endless possibility, memories waiting for a memoirist.

Tuscany Wenger’s soft, three-dimensional sculptures explore nature and the universe, underworlds and histories. Her objects and creatures are made to comfort and defend.


By choosing to work in the gap, rather than on either side of it, these artists explore and enlighten the tenuous space between transparency and mystery, humor and tragedy. Strewn throughout the gallery are broken narratives of longing, malaise, conflict, and lust. These snapshots of humanity offer little reference to prior events or to what may follow; there is no before and there is no after. The artists’ works are suspended in time, slipping through the gap, and creeping back onto the walls and through the windows of the known world. The viewer is pulled down the rabbit hole and into this nether world. Most effective at achieving this dreamlike, surreal quality are Lee, whose intense oil paintings capture the essence of space and emptiness, as if everyone has been raptured you the viewer is the only person left standing in this real yet unreal world. Ku’s elegantly wicked drawings are like sneaking a peek at a dirty picture in the library and realizing that the nude drawing is beautiful and suddenly not so dirty. Russo’s watercolors are uncomfortably non-utopian and too real to be surreal. Her paintings reflect the qualities of the times in which we live in a world where daily events can be cartoonish, appalling, sublime and entertainingly odd. If this was Conn’s idea of a wonderland, I’d like to visit again.

Copyright Leanne Goebel. May not be used without permission.