An abandoned mining area above the town of Ward, Colorado, inspired John McEnroe’s most recent body of work, Half Life, currently on view at Robischon Gallery in Denver, in a solo show thematically connected with four other artist’s solo shows, under the curatorial title: “Object | Nature.” McEnroe, one of Colorado’s best known abstract sculptors, has for some time been exploring organic forms, in contrast to the inorganic plastic material that he gravitates toward. His exhibition features branches, roots and books cast in or covered in resin. Many of the titles identify the organic source material: Pinon, Ponderosa, Lodgepole. Others are given more human personifications: Bride, Fragment (Thumb), Torso. Still others refer to the material, and its meaning. A large, white wishbone-shaped double branch is itself called Half Life.

“It has lots of references,” McEnroe says. “The half-life of plastic, the half-life of this organic material that I’m mining. I’m way more than doubling the half-life by casting them… Now they are a burden to society, these large plastic trees.” The work also references the reality and mythology of the West. Describing the mining area as a bunch of holes in the ground with big piles of rock and rusted metal objects, he says, “It’s sad, desperate, scary, romantic, but as you linger that soon peels away and you begin to see the endless disappointment that this process must have offered.” The materials used to craft these objects will outlive the myths created.

The commercial-grade plastic McEnroe uses has a semi-translucent radiance to it, and its whiteness gives the works a reverence and purity that is unexpected. Using plastic allows McEnroe to do things other materials cannot, but he doesn’t love to work with the material. “It’s just another tool in the toolkit,” he says. McEnroe’s toolkit includes a BFA in Ceramics from Kansas University and an MFA from Ohio State. In 1994 he moved to Denver, and began working as an apprentice to sculptor John De Andrea, in which role he sanded and rasped many of De Andrea’s hyperrealist polyvinyl figurative works, as his studio assistant. In 2002, he began doing exhibition production at the Denver Art Museum. Currently, McEnroe teaches at Rocky Mountain College of Art and Design and works for a commercial plastics manufacturer, in addition to making art. He has completed five major public art commissions in Denver and was included in the popular “Embrace!” exhibition at the Denver Art Museum in 2009. McEnroe’s sculptural oeuvre is filled with art-historical reference points. “I’m a product of many years of art school, and if I don’t push back against that then I didn’t get my money’s worth,” he explains. 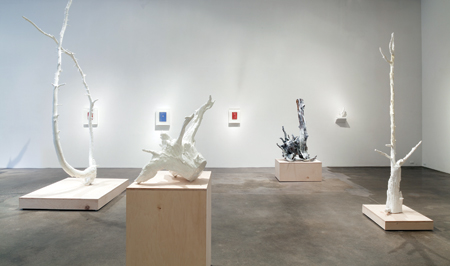 That push back often gives McEnroe’s work a sardonic edge. A wood and resin piece titled Arneson Out West references sculptor Robert Arneson, who used everyday objects to make confrontational statements, a practice McEnroe also employs. An exhibition at Robischon in 2009 featured sculptures created from melted plastic playground toys. His well-known work of public art installed at the Highland Pedestrian Bridge in a popular Denver neighborhood, titled National Velvet, was created with industrial-grade nylon filled with sand and hardened with resin to create a rigid translucent shell. By day, it is a tower of bright red organic forms that create an obelisk. By night, the work glows from within.

Although it was the realist De Andrea who introduced McEnroe to plastic, McEnroe’s own practice has a strong affinity with artists such as Robert Rauschenberg and Jessica Stockholder in its effusive embrace of common materials put together in quasi-unadulterated ways.

This July, McEnroe will be the focus of a solo show at MCA Denver. Intriguingly, he hints that his show at MCA Denver may not include as much of his chosen plastic material. “The tree objects pushed me into a more naturally organic interest. It may be that organic forms in nature are doing more than I give them credit for and maybe I need to explore that.”

John McEnroe at the Museum of Contemporary Art Denver opens in July. http://www.denverartmuseum.org